This great Clan spread its influence throughout the Wester Isles of Scotland from the 12th century. The traditional progenitor is given as Leod, or Liotr, son of the Norse King Olaf The Black. Leod claimed the islands of Lewis and Harris as his birthright and later acquired the Isle of Skye by marriage. The defeat of Kind Haakon of Norway at the Battle of Largs in 1263 left the MacLeods in Control of almost half the Hebrides.

The MacLeods had an uneasy relationship with their neighbours the MacDonalds, following them to the bloody battle of Harlaw in 1411. However, when royal policy during the reigns of James IV and V sought to break the MacDonald Lordship of the Isles, the MacLeods distanced themselves from the MacDonalds and survived unscathed. Dunvegan castle was extended and became a seat of Gaelic culture and art. Although loyal to the Stuart cause, when Bonnie Prince Charlie landed without a strong army, the Chiefs believed the rising of '45 to be doomed and would not follow the Prince's Standard, although many MacLeods did fight under their individual Lairds and Captains.

Text by G. A. Way of Plean, Secretary to the Standing Council of Scottish Chiefs. The Heritage Collection. BCP 01752 816181.

I retyped the text from the card below because I felt it was too hard to read the scanned version. 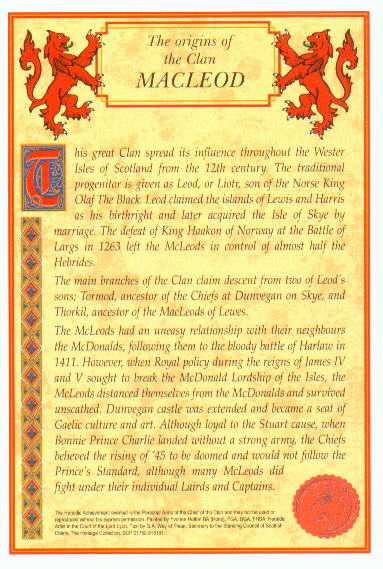